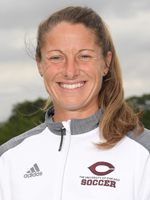 Sitch returns to the Hyde Park campus after two previous stints as an assistant coach for the UChicago women's soccer team. She was part of the coaching staff for three seasons from 2015-17 and subsequently rejoined for the fall 2019 campaign.

As lead assistant coach for the Maroons, Sitch was also the program's recruiting coordinator. She devised game plans and team scouts, while organizing team and individual training sessions.

With Sitch on staff, the Maroons put together one of their most successful multi-year runs in program history. Their cumulative record stood at 53-13-1 for a .798 winning percentage. UChicago qualified for the NCAA Division III Championship field all three seasons, reaching the semifinals in 2016 and the national championship game in 2017.

Sitch becomes the second woman to currently serve as head coach of a men's soccer team within the UAA.

Since 2020, Sitch served as Assistant Women's Soccer Coach for the Chicago Red Stars, who compete in the National Women's Soccer League (NWSL). She was deeply involved with team and individual training sessions, facilitating individual player development plans, and organizing player profiles for the college draft. The 2021 Red Stars squad was a NWSL Finalist and the 2020 team was a NWSL Challenge Cup Finalist.

Sitch previously coached at the NCAA Division I level as assistant women's soccer coach for University of Illinois – Chicago (2018-19).

On the international level, Sitch worked with the U.S. Soccer Youth National Team (2019-20). She was the Assistant Coach for the Under-16 Girls National Team (GNT), which took first place in the UEFA Women's International Development Tournament in Portugal.

A native of Oswego, Ill., Sitch was Illinois Gatorade Women's High School Soccer Player of the Year in 2002. She went on to compile record-setting numbers at DePaul University. Sitch broke the school's career records in points (90), goals (32) and assists (26). Her collegiate honors included Second Team NSCAA All-American (2003), Conference USA Player of the Year (2003) and First Team All-Big East (2005). She earned her bachelor's degree from DePaul in Fitness Management & Physical Education in 2007.

As a professional soccer player, Sitch was drafted by Sky Blue FC of the Women's Professional Soccer (WPS) in 2009. The team went on to win the national championship in that inaugural season. Domestically, she played professionally for the Chicago Red Stars, Western New York Flash and Atlanta Beat. Sitch played on the international stage for Melbourne Victory in Australia, as well as Hammarby IF and Balinge IF in Sweden.

The 2021 season was another landmark campaign for UChicago. The squad reached the NCAA Semifinals for the fourth time in program history and third time since 2017. The Maroons posted a 16-6-1 record while playing the toughest strength of schedule in the nation. The defense totaled 13 shutouts and only allowed 11 goals in 23 games. The 0.449 goals against average ranked third in NCAA Division III. Midfielder Ben Brandt was a USC Third Team All-American, Griffin Wada was picked as the UAA Defensive Player of the Year, and Ryan Yetishefsky was named UAA Sophomore Rookie of the Year.

In Mauro's 2019 debut season, the Maroons posted a 12-2-5 overall record and a 7-0 mark in the University Athletic Association (UAA). UChicago became the first team to win all its conference games with no goals allowed in UAA history. The squad advanced to the second round of the NCAA tournament as well. Goalkeeper Aaron Katsimpalis was picked as a Second Team All-American, Scott Lich was named UAA Defensive Player of the Year and defender Richard Gillespie was UAA Rookie of the Year.